I was pleased to be accepted into a group of Photographers that shoot the Salford Music Festival. I put my request in to shoot JB Barrington on Saturday and was free Friday. I was asked to try to cover the acts playing at Monton on Friday night.

Monton is great for a night out easy parking and a good selection of pubs with a great atmosphere. A regular told me that it had a dark past but money had been spent and was now a great place to be.

I must thank the other photographer on the night Theo Dibbits for showing me around the area and giving some great tips.

The venues consisted of:

The Bluebell a large traditional pub

The blind Pig a modern bar with staff that kept passing with very tempting looking food.

All the bars seemed to have loyal friendly customers who enjoyed the music and were happy to chat to the stranger with the camera. The staff are also very friendly and enjoyed having the festival running in their bars. As ever a big thanks to all venues for being so accommodating to me it is appreciated. 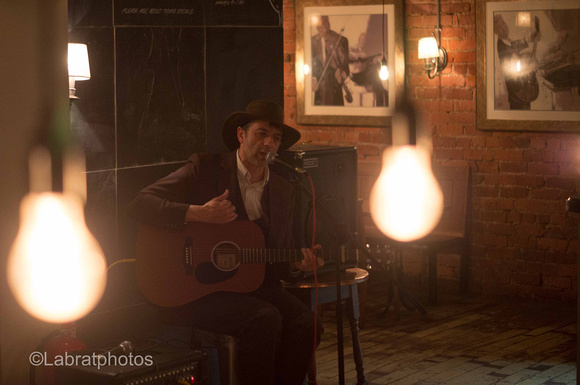 Martin Pluck has a very strong image in suit and hat he explained his journey from Scotland to new home in Leeds. I think that they are lucky to have him I could have listened to him play and sing all night.

While Martin was playing at the Blind Pig Kate Ashton Butler arrived guitar in hand. I thought she had got the timings wrong but she had arrived early to watch and support the other acts. I feel that this kind of attitude that gives Manchester Music its friendly reputation. 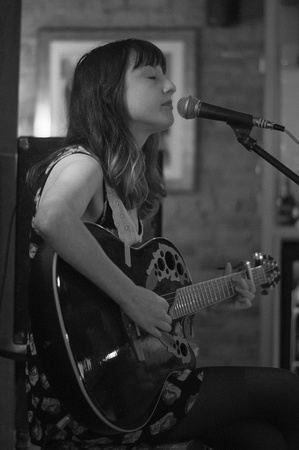 KateKate at the Blind Pig. 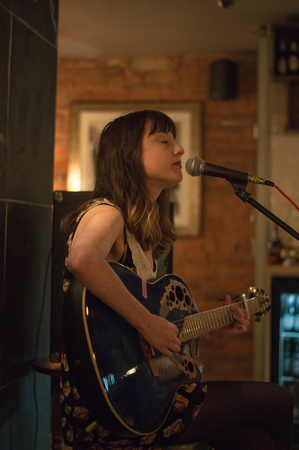 Kate has a lovely delicate voice and was very popular in the bar. I scribble notes to remind me of the acts and realised that I had written 'Kate-Pig' to remember the venue. I then passed her the book to write her contact details. I can confirm she is definitely not a pig and didn't take offence 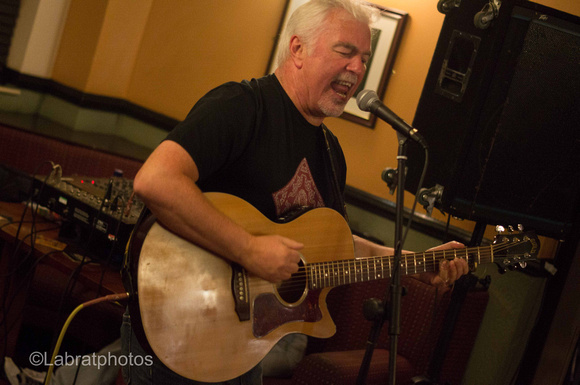 J Wilson was unfortunate in that his set was interrupted but like a true professional he took a break and came back with great guitar and vocals to please the crowd in the Park. 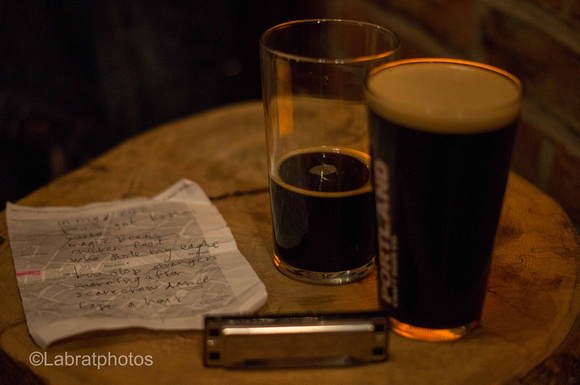 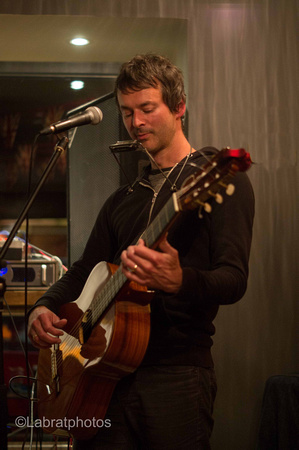 Mano Mcglaughlin played the first set of the night across from the Park in Playfoots a small trendy looking bar. I would recommend making an effort to see him live or at least look him up on the internet his song Peach got Bones deserves to do well. I really enjoyed listening to Mano and noticed Martin nodding in appreciation of Manos talent. 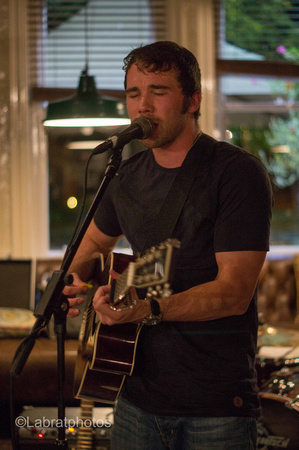 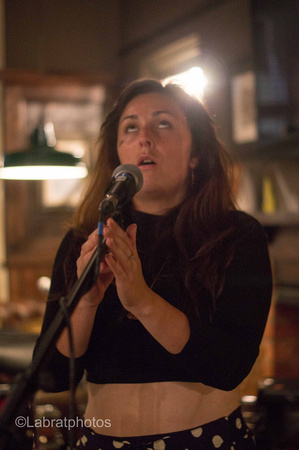 Bones are a duo of female singer and male guitar and vocalist. They played at the Blue Bell and went down really well. 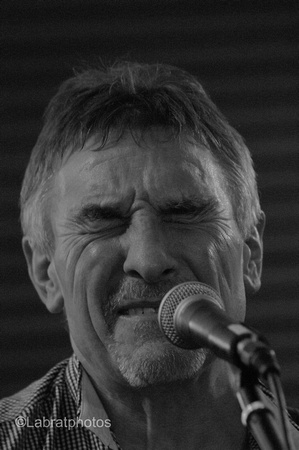 A quick run back to the park for Phil Middleton as well being a great played and singer Phil has the ability to take a well known song and give a real twist, this can provide a marmite love or hate moment. I loved it and again could have stayed and listened to his performance all night.

Friday night done and Im shattered. I must give credit to the sound engineers who kept the levels brilliantly each covering numerous venues and doing a great job.

Saturday Night The Big One The Fall

I arrived early at Lower Kelsal Social Club to get organised. It is a great venue and was already filling nicely. I spotted a couple of Characters from the  Manchester Scene JB Barrington poet and MR Peeps promoter and general interesting bloke. They have been working together on a new project that looks brilliant and Im excited about but that for another day. 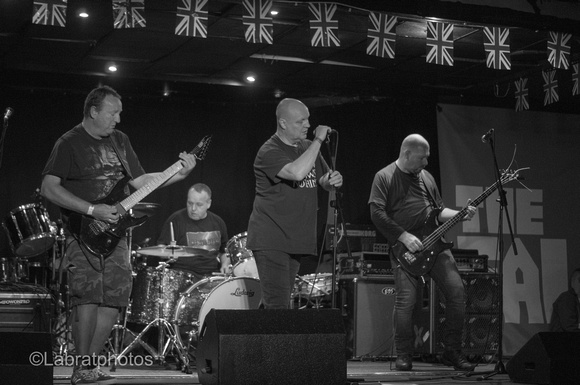 The first act to take to the kelsal stage was the band Benefit State a local punk band with great musicians and a solid punk singer. The night was off to a great start. 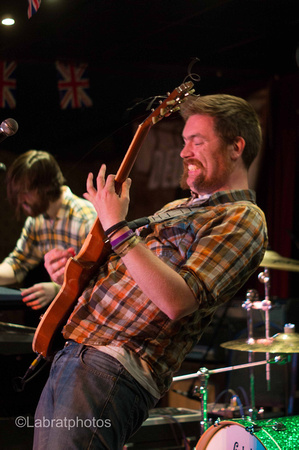 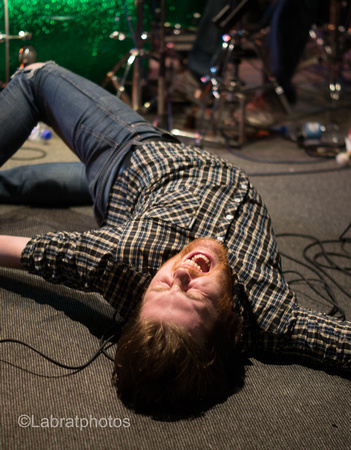 At the end of the Trojan Horse gig you are left open mouthed thinking did I really just see that as the band pick themselves of the floor and retrieve their instruments from the crowd. A write up cannot do justice to the energy of this band see them live at the earliest opportunity. 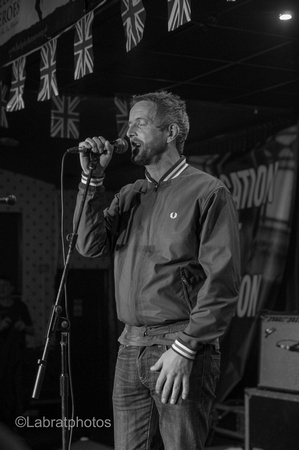 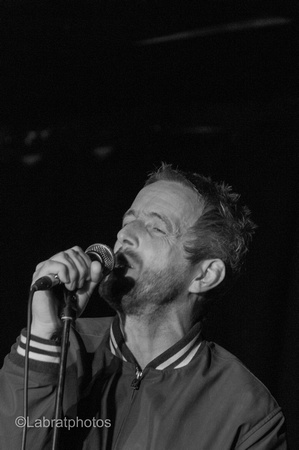 JB Barrington stood at the mic and looked across the full room at the Lower Kelsal. The crowd looked back not sure what to expect as he introduced himself as a poet. Then he hit them with his machine gun style fast yet clear with no words wasted JB is able to convey loss, memories, humour, disgust (grapes of wrath) in an amazing way. Even before he has finished the first poem the crowd are his hanging of his every word and recognising every point made. If you have a negative view of poetry look him up online or see him live it will change you. They say you should always leave the audience wanting more and that is exactly what happened as time was called on JB. 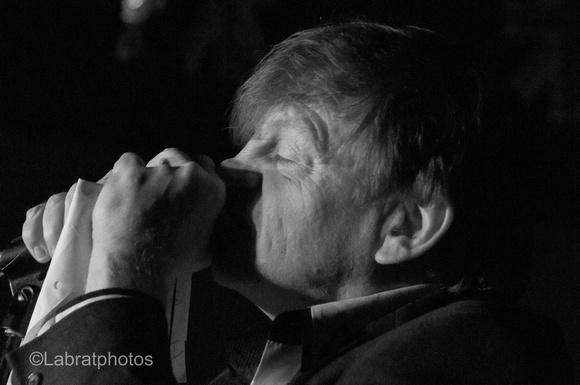 The main act of the festival are The Fall with the unique front man Mark E Smith. You will struggle to find a performer who has produced more songs or done more in their career than Mark E Smith. He has numerous books written about him. His fans are crazy about him and his music. Its doesn't matter if you can't understand him as their are several hundred fans reciting the lines at the same time.

The Fall has two drummers to keep the continuos heavy beat as guitars and keys add the music and Mark his special vocals. He may be getting on but Mark still has a presence and old habits die hard as he pushes over stands and glares at the crowd. 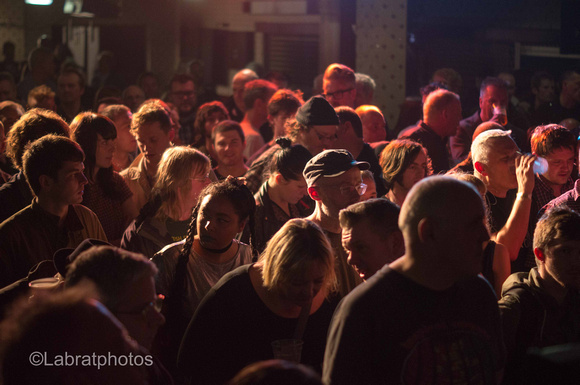 A huge thanks all organisers of the Salford Music Festival for letting me be involved and congratulations on a great weekend.